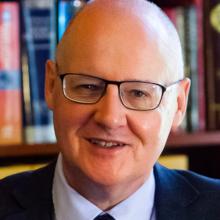 Professor Stewart Gill is the eighth Master of Queen’s College, University of Melbourne. Professor Gill has a distinguished record of leadership and management in residential colleges. He has been Principal of Emmanuel College at the University of Queensland since 2005. He is also founder and director of the Emmanuel Centre for the Study of Science, Religion and Society, and an Adjunct Professor in the School of Historical and Philosophical Inquiry. He previously held positions with the Melbourne residential colleges as Warden of Ridley College and Deputy Warden of Trinity College.
Scottish by birth, Professor Gill graduated with an honours Master’s degree from the University of Edinburgh. He continued his studies in Canada, earning a Master of Arts from the University of Toronto and a PhD from the University of Guelph. He is a Fellow of The Royal Historical Society, London. His published historical studies span Canada, Scotland and Australia.