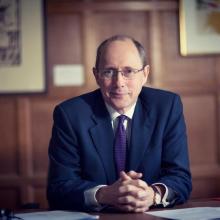 Andrew Dilnot is Warden of Nuffield College Oxford. He was Chairman of the UK Statistics Authority from 2012 to 2017, and was the Chairman of the Commission on the Funding of Care and Support, which reported in 2011. He was Principal of St Hugh’s College, Oxford, from 2002 to 2012 and a Pro Vice Chancellor of Oxford University from 2005 to 2012. He was Director of the Institute for Fiscal Studies from 1991 to 2002. He was the founding presenter of BBC Radio 4’s series on the beauty of numbers, ‘More or Less’ and also presented Radio 4's ‘A History of Britain in Numbers’.

He has served on the Social Security Advisory Committee, the National Consumer Council, the Councils of the Royal Economic Society and Queen Mary and Westfield College, as a trustee of the Nuffield Foundation, and as chairman of the Statistics Users Forum of the Royal Statistical Society.