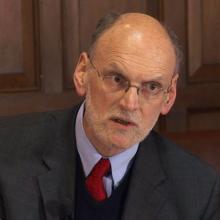 Professor Biggar holds a B.A. (Hons) in Modern History from the University of Oxford; a Master of Christian Studies from Regent College, Vancouver, Canada; and an M.A. in Religious Studies, and a Ph.D. in Christian Theology, from the University of Chicago. His research interests include the formative bearing of religious concepts on moral life; the contribution of religion to the health of liberal societies; the development of a concept of ‘public reason’ that permits the engagement of metaphysically contradictory positions; theories of natural law; the theology and ethics of national identity and loyalty, of forgiveness, of killing (especially in relation to suicide, euthanasia, and war), of military intervention, and of burying the past after civil conflict, and of the vocation of universities. He has published the following books: Behaving in Public: How to Do Christian Ethics (Eerdmans, 2010); (co-ed.) Religious Voices in Public Places (Oxford University Press, 2009); Aiming to Kill: the Ethics of Suicide and Euthanasia (DLT, 2004); (ed.) Burying the Past: Making Peace and Doing Justice after Civil Conflict (Georgetown UP, 2001, 2003); (co-ed.) The Revival of Natural Law: Philosophical, Theological,and Ethical Responses to the Finnis-Grisez School (Ashgate, 2000); Good Life: Reflections on What We Value Today (SPCK, 1997); The Hastening that Waits: Karl Barth’s Ethics (OUP, 1993, 1995); and Cities of Gods: Faith, Politics & Pluralism in Judaism, and Christianity & Islam (Greenwood, 1986).