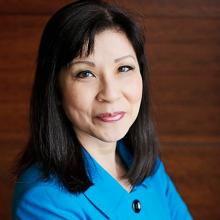 She is chorus master of the Grand Rapids Symphony, a Grammy-nominated professional orchestra. Her conducting, teaching and adjudicating engagements have taken her to Europe and Asia, Australia, Brazil, Canada and South Africa. Shangkuan has a signature choral series with earthsongs and is the music editor of the Calvin Institute of Christian Worship Choral series, published by GIA. In 2013, Michigan ACDA honored her with the Maynard Klein Choral Award for “artistic excellence and lifetime leadership in choral music.” She made her conducting debut at Carnegie Hall in 2014. She has also served on the jury of several international choral competitions in Europe and Asia. She served as president of ACDA Central Division and Michigan ACDA, and has commissioned and premiered numerous choral works by composers performed in concert halls around the world. A student of pre-eminent late American choral conductor Dr. Joseph Flummerfelt, she received a Bachelor of Music in Church Music (summa cum laude) and Master of Music in Choral Conducting (with distinction) from Westminster Choir College in Princeton, New Jersey, and a DMA in Choral Conducting from Rutgers, the State University of New Jersey.