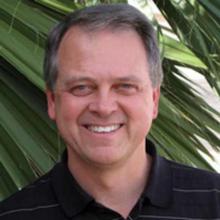 Jeff received his B.S. in Zoology and B.A. in German from Michigan State University. He then pursued a Master of Divinity degree at the International School of Theology in Southern California. After seminary Jeff received a Ph.D. in Biophysics at the University of California-Berkeley. After postdoctoral work at Duke University, Jeff joined the Zoology Department (now the Department of Integrative Biology) at UW in 1991. Jeff’s research focuses on how embryos change shape during development. He is also an award-winning biology educator. Jeff is an affiliate in the Religious Studies program at UW, and has been engaged in science/faith dialogue on the UW campus and nationally for many years, including currently serving as the Board Chair of the BioLogos Foundation. Jeff has served the national and local faculty ministries of InterVarsity and Cru in the U.S., and serves as faculty advisor for student Christian fellowships on the UW campus. In addition to many scientific publications, Jeff is lead author of The World of the Cell (Pearson), and, with Ron Numbers and Ron Binzley, co-edited The Warfare between Science and Religion: The Idea That Wouldn't Die (Johns Hopkins Univ. Press). Jeff and his wife Susie have two grown boys, Jon and Christopher.