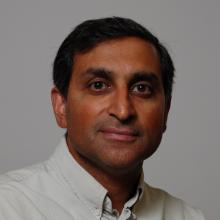 His family roots are from the state of Kerala in southern India, from the Christian community there sometimes referred to as St. Thomas Christians, after the apostle whom church tradition has made a missionary journey to Kerala in A.D. 52.  Tom was born in India but moved to the U.S. as a seven-year old, along with his parents and older brothers.  He did his PhD at the University of North Carolina - Chapel Hill, a post-doctoral fellowship at the University of Chicago and since 1990 has been on faculty at the University of Alberta.  Tom’s research focuses on the formation and evolution of the Earth’s continental crust early in the planet’s history and includes doing fieldwork in the far Canadian North.  Tom and his wife Jeenu have two grown children, Jacob and Miryam, both of whom are currently medical students.  They attend Knox Evangelical Free Church in Edmonton.

My group's research focuses on understanding how Earth's continental crust, which is unique in the solar system and played a key role in making the Earth suitable for life, formed early in the planet's history.   There are relatively few places worldwide where the earliest record of Earth history, from about 3.6 to 4.4 billion years ago, is preserved. One of those places is northern Canada, the so-called Canadian Shield. Over the past decade, my students and I have investigated one particular location in the Shield about 1300 km north of Edmonton, the Acasta Gneiss Complex, that contains some rocks that are about 4 billion years old.  We conduct fieldwork in this remote location and subsequent laboratory work on the rock samples we collect. Specifically, we use the chemical and isotopic composition of the rocks and individual minerals in these rocks to gain insights on how these rocks and in turn the most ancient continental crust formed.