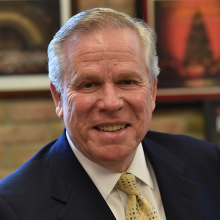 Now emeritus professor of conducting, he served on the faculty of the University of Michigan School of Music, Theatre & Dance for thirty years where as director of choirs he led the graduate program in choral conducting and oversaw the University’s eleven choirs.   In February 2006, he received two Grammy Awards (“Best Choral Performance” and “Best Classical Album”) as chorusmaster for the critically acclaimed Naxos recording of William Bolcom’s Songs of Innocence and of Experience. The Naxos recording of Milhaud’s monumental L’Orestie d’Eschyle, on which Blackstone served as chorusmaster, was nominated for a 2015 Grammy Award (“Best Opera Recording”). Opera Magazine reviewer Tim Ashley wrote: “the real stars, though, are the University of Michigan’s multiple Choirs, who are faced with what must be some of the most taxing choral writing in the entire operatic repertory. Their singing has tremendous authority and beauty, while the shouts and screams of Choéphores are unnerving in the extreme. Their diction is good too: the occasions when we don’t hear the words are Milhaud’s responsibility, rather than theirs. It’s an extraordinary achievement, and utterly mesmerizing.”