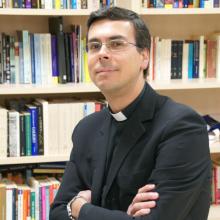 Born in Córdoba, Spain (1970), Javier Sánchez-Cañizares studied for the degree in Physics at the Autonomous University of Madrid (1993), where he also obtained a PhD with a thesis entitled “Self-consistent description of transport in quasi-one-dimensional superconducting wires” (1999) belonging in the field of Condensed Matter Physics. In 2001, he moved to Rome for a Bachelor’s and PhD in Fundamental Theology at the Pontifical University of the Holy Cross. This second thesis tackled  the revelation of God in creation within the patristic quotations of the Areopagus sermon (Acts 17:16-34). It was supervised the physicist and theologian prof. Giuseppe Tanzella-Nitti.

After being ordained a priest in 2005, he settled in Pamplona (Spain), where he has been teaching at the University of Navarra until the present date. Since 2016 he is Associate Professor of "Science, Reason and Faith" and head of the CRYF group, founded by late prof. Mariano Artigas. He is also a researcher of the Mind-brain group of the Institute for Culture and Society and, as of 2020, accredited tenured professor by the Spanish National Agency for Quality Assessment and Accreditation (ANECA).

Currently, he is the leader of the project “Science and Religion in Spanish Schools,” funded during the period 2018-2021 by the John Templeton Foundation, and member of the scientific council of the international interdisciplinary journal “Scientia et Fides.” He is also member of the Society of Catholic Scientists, where he lectured at its 2018 conference on "The Human Mind and Physicalism."

Javier Sánchez-Cañizares' book "Universo singular" won one of the 2018 Expanded Reason Awards in the research category, organized on a yearly basis by the Francisco de Vitoria University together with the Vatican Foundation Joseph Ratzinger - Benedict XVI. "Universo singular" introduces the reader in the context of contemporary physics to reveal some singularities that occur in our knowledge of the universe. The existence of these singularities points to an emergence of authentic novelties in nature, appealing to the use of an expanded reason that helps to understand the world we inhabit. The book thus offers a necessary starting point, rooted in science, to renew philosophical reflection on the cosmos

In the fields of Philosophy of Physics and Philosophy of Mind, my research focuses on the Interpretations of Quantum Mechanics and their application to the development of a renewed philosophy of nature. More specifically, I study the emergence of complex adaptive systems and optimization procedures that ask for a deeper philosophical understanding of natural processes, particularly the emergence of higher human faculties.

My interests in the Origin of the Universe and Creation lie in the question of the origin and arrow of time together with the Past Hypothesis. I am also interested in renewing representations of God as Creator.