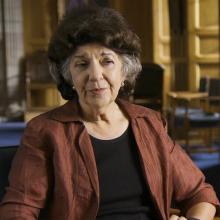 Stump received a BA in classical languages from Grinnell College (1969), where she was valedictorian and received the Archibald Prize for scholarship; she has an MA in biblical studies (New Testament) from Harvard University (1971), and an MA and PhD in medieval studies (medieval philosophy) from Cornell University (1975). Before coming to Saint Louis University, she taught at Oberlin College, Virginia Polytechnic Institute and State University, and University of Notre Dame. Currently, she also holds secondary or honorary appointments at Wuhan University, the University of St Andrews, and Australian Catholic University.

She has published extensively in medieval philosophy, philosophy of religion, and contemporary metaphysics. Her books include her major study Aquinas (Routledge, 2003), her extensive treatment of the problem of evil, Wandering in Darkness: Narrative and the Problem of Suffering (Oxford, 2010), and her recent treatment of the Christian doctrine of the atonement, Atonement (Oxford, 2018).

Among the named lectureships she has given are the Gifford Lectures (Aberdeen, 2003), the Wilde lectures (Oxford, 2006), the Stewart lectures (Princeton, 2009), and the Stanton Lectures (Cambridge, 2018). In 2013, the American Catholic Philosophical Association awarded her the Aquinas medal.

She has held grants from the Danforth Foundation, the Mellon Foundation, the National Endowment for the Humanities, the American Association of University Women, the National Humanities Center, and the Pew Charitable Trust. In addition, she has received several teaching awards, including, in 2004, the Robert Foster Cherry Award for Great Teaching from Baylor University. For 2013–15, together with John Greco, she held a $3.3 million grant from the John Templeton Foundation for a project on intellectual humility. In 2017 she was awarded an honorary doctorate from Tilburg University, the Netherlands.