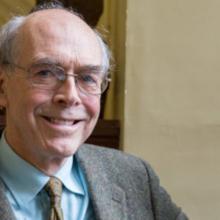 Oliver O’Donovan, born in 1945 in London, was educated at Balliol College and Wycliffe Hall, Oxford, and at Princeton University, and was ordained priest in Oxford in 1972.  He was Regius Professor of Moral and Pastoral Theology and Canon of Christ Church Oxford (1982-2006), before which he taught at Wycliffe Hall, Oxford (1972-7) and at Wycliffe College, Toronto (1977-82).  He was Professor of Christian Ethics and Practical Theology at Edinburgh (2006-12), and has been Honorary Professor of Divinity at St Andrews since 2013.   He has written on Augustine, on the theological basis of moral concepts, on contemporary bioethical dilemmas, on political theology and the ethics of war.  He has served on the Church of England’s Board for Social Responsibility, Doctrine Commission and Faith and Order Commission, and was recently convenor of the Archbishops’ review of the Crown Nominations Commission.   He is a past President of the Society for the Study of Christian Ethics, a Fellow of the British Academy and a Fellow of the Royal Society of Edinburgh.  He is married to Joan Lockwood O’Donovan. They live in Scotland and have two sons.

I am currently preparing to deliver three Cunningham Lectures at the School of Divinity in Edinburgh later in 2021 on The Ambitions and Temptations of Political Theology. This brief prospectus summarises the problematic they seek to address – but not the answers I hope to suggest!

The idea of a "political theology" has been controversial, because the medieval European division of responsibility between secular and ecclesiastical power bequeathed to the modern West a particular concern over the boundary between politics and faith.    Concern over improper theological “legitimation” of regimes extended in the twentieth century to include legitimation of oppositions.   From Augustine's City of God to the Confession of Barmen we encounter a binary pattern of interpretation:   two cities, two kingdoms, two rules, two authorities, two natures, two swords, two worlds.   Political theology aims to put this pattern in its historical context.   Arising from the Jewish experience of exile, appropriated in the Christian understanding of its pilgrimage to the "fatherland", it was neither the first nor the last word of Scripture, but described an interim-state of waiting.   Abstracted from its context in the institutional balance of Christendom and treated as an absolute, the binary separation serves only to impose the  “secularist policing” (Milbank) of social and political thought.

If  “the death of God has led to the death of the city” (Lacoste), it is because the end of Christendom has brought an end to the idea of a spiritually bounded “politics”.   The sphere of the political is now infinitely expansive – not in the form of "big government", decried by libertarians, but through the  homogenising and totalising of political concepts even beyond the scope of government.   Technological developments that overwhelm personal values create social structures that regulate relationships and ideas in a uniform way.   Not governments,  but schools, hospitals and industries oppress believers’ consciences.   The totalitarian society is an onion, which has no centre and no flesh, but only inner and outer layers of indistinguishable fibres (Arendt).    The new political theology is worried about every context in which the responsible agent self is reduced to a cipher within a feeling, thinking and acting “We”.    Political order becomes a skill in conforming to approved names for things.   The message of political theology is that religious truth that hopes to survive nihilism must equip believers to understand and criticise the names and concepts that are treated as normative around them, and to battle for different, and socially costly, forms of identification.   The success of political theology lay perhaps in its capacity to predict the route the West would take from the market-liberalism of the eighties to aspirations for a totalised democracy and the consequent emergence of universal bureaucratic control.    The hope of a democracy gifted with eternal youth, constantly renewed by injections of vision from outside tired "establishments", was deflated by the re-emergence of primitive hatreds and deceptions in the political sphere, and as the diffusion of  political energy became wider, the actual institutions of government itself became weaker and the power to impose order came to be vested in institutions supposedly pursuing a multitude of different aims, but indistinguishable in their internal relations.

Together with the weakening of government we have a constant struggle for representation, defined as characteristic of all political agency.   To represent is to “bear the person” of a society (Hobbes), which is to say, to be its face, to present that society to others, and to reflect it back to itself, mobilising the authority of identity in support of political bodies and political action.  Societies need to renew their representation, and find more or less stable ways of doing so.   A hallmark of the most recent phase of Western politics is an intense preoccupation with recovering forgotten strands of identity and discovering new ones.    Late-modern politics is exceptionally focussed on expressive solidarities – a measure of its departure from the ideals of Christianity, which subordinated solidary identities to the performance of justice:  “Take away the vaunting and what are men but men?” (Augustine)

Representative political speech communicates in practical reason, framing practical ends in rational ways that can be commonly approved and so cooperated with;  it is a bulwark to protect society as a whole against contradictory demands.   It offers a word of life “as a prize of war” (Jeremiah), snatched from the jaws of biological extinction.   Theology has a different word of life to utter, and that is how in Christian contexts the two speeches have come to be differentiated or even opposed.    Yet clearly the two words of life cannot be absolutely opposed, which would create a logic in which neither could be true and the other false, like the Manichean princes of light and darkness.    A word proves its truth only as it reveals the truth behind falsehoods.   The authority of any word addressed by theology to politics, whether to a particular political question or to the foundations of political society itself, will be proved by its capacity to make sense of inadequate political representations in the light of divine grace.   Political theology therefore understands itself as a critique of “ideology”, especially materialist ideologies, solidarist identities and immediatist hopes of achieving justice without mediating social institutions.

The most important question to be put to political theology is whether, in diagnosing the character of late-modern politics, it has a truer account to offer, not merely another ideology. It can meet this challenge if it satisfies two conditions:  its message must echo the liberating word of God that breaks the power of sin;  and its descriptions must clarify alternative formations of social experience by the love of God.     It may fail on either one of these points.   If it is merely critical and stops short with explanations of why things are as bad as they are, it becomes merely theoretical and descriptive, forsakes the missionary task, and has no power to equip believers for the challenge of decision.    If, on the other hand, it becomes impatient with careful description, and wants to plunge  too quickly into the general political discourse, it loses touch with the interpretative task of theology, which must set political realities in the context of divine action, to allow those who seek to act to know just where they stand.

Each of the three forms of ideology - materialist, solidarist and immediatist - can exert a dangerous fascination over political theology.   The three temptations of Jesus,  to turn stones into bread, to cast himself down from the pinnacle of the temple, and to acknowledge himself dependent on the patronage of established power, correspond to materialist politics, solidarist identity-creating politics, and a politics of conformity.   A political theology that starts from the “political” as a known quantity and fashions a “theology” to fit it, will always fall into one of these temptations. But they are only temptations, not a doom.   There is an alternative route for political theology to take, beginning with the route of divine action in law and history, the substance of the Scriptural discourse on politics from Deuteronomy to Revelation.