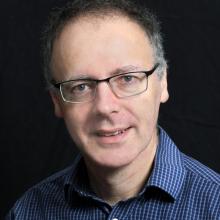 Andrew Steane was born in Bath, England (1965) and educated at Christ’s Hospital (school) and Oxford University. He graduated with a BA in physics in 1987. He completed a D.Phil. thesis “Laser cooling of atoms” in Oxford in 1991. From 1990–1992 he was a Junior Research Fellow of Merton College, Oxford. During 1993–1994 he was a European post-doctoral fellow at the Ecole Normale Sup´erieure, Paris. From 1995–1999 he was a Royal Society University Research Fellow, based at the University of Oxford, during which period he was also a Fellow by Special Election of St Edmund Hall, Oxford (1996–1999) and a Lecturer in Physics, St Edmund Hall, Oxford (1998–1999). In 1999 he became a University Lecturer and Tutorial Fellow in Physics of Exeter College, Oxford. He was awarded the title of Professor in 2002. For part of 1996 he was a guest researcher at the Institute for Theoretical Physics, University of California, Santa Barbara. He was a Visiting Professor at the University of Innsbruck in 1999 and at the University of Ulm in 2006. He served on the organising committee of Physics 2005, a century after Einstein, Warwick 2005 and on various international advisory committees. He co-organised the European High Level Scientific Conference “Quantum Entanglement and Quantum Information”, Les Houches 2001. He has acted as a doctoral thesis examiner for various universities. His scientific research concerns the coherent manipulation of atoms and quantum information theory. He was awarded the Maxwell Medal and Prize of the Institute of Physics in 2000 for his work on quantum error correction. He has given numerous public lectures and school demonstrations in physics. He has taught Sunday school groups for many years at St Andrew’s church, Linton Road, Oxford. He is married to Emma Steane (since 1996). They have three children.