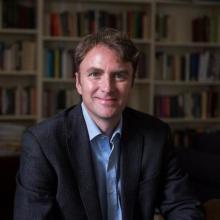 Horobin is Professor of English Language and Literature at the University of Oxford and a Fellow of Magdalen College. He gave a talk on his latest book, a Very Short Introduction to the English Language, at Google London.

He has been a visiting professor at the University of Connecticut, Harvard University and Charles University. He has also acted as honorary secretary for the Society for the Study of Medieval Languages and Literature.

Horobin has recently appeared in several radio and television programmes to discuss linguistic issues including BBC Breakfast TV, BBC Radio 2 Jeremy Vine Show, BBC Radio 4 Stephen Fry's English Delight, BBC Sportshour and NPR Here and Now. Furthermore, he has been interviewed for various articles in numerous national papers; examples include So Trump makes spelling errors. In the Twitter Age, whoo doesn't? , Trump's covfefe takes hold in the land of the spelling bee, Spelling it out: is it time English speakers loosened up? , The true importance of good spelling. He gave a talk on his latest book, a Very Short Introduction to the English Language, at Google London.