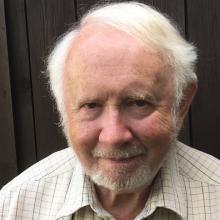 Born in 1937 in Barrow-in Furness, Ian grew up in a family with a strong Christian and international background. His grandparents on both sides of his family were missionaries in India/ Fiji and Spain. Ian’s mother was a piano teacher and his father a mechanical engineer working on the design of submarine engines.

Ian became an architect following studies in London and Atlanta and worked in various architectural offices in London, Atlanta, Montreal and Detroit from 1958-1971 They included the offices of Erno Goldfinger, Minoru Yamasaki- (the designer of the Twin Towers in NYC). Ian’s final job before moving into architectural education was as Job Architect working for Chamberlin Powell and Bon, the architects of the Barbican Arts Centre in the City of London.

He then moved into academia to become Principal Lecturer in Oxford Polytechnic (now Oxford Brookes University) from 1971-1989. He also taught Urban Planning , Shelter and Settlement and Landscape Painting from 2002-2013 in the Byron Fellowship Summer Schools held in Indiana and North Carolina.

During the 1980’s Ian was Chair of the ‘Association of Christian Planners and Architects and Planners (ACPA) Through conferences, debates, study visits and writing this body sought to develop a radical Christian critique of current practice and theory for practitioners and students within the planning and architectural professions. ‘Christian Dimensions in Architecture and Planning’ (1985) Ian Davis, UCCF Associates

Since 1972 Ian’s primary academic work has been Disaster Risk and Recovery Management, as an academic, author, researcher, consultant, NGO Board member and advisor to Governments and UN Agencies. He wrote thefirst PhD on Disaster Shelter in University College London (UCL) from 1972-85.   He wrote the first book on ‘Shelter after Disaster’ (1978), coordinated the first UN Guidelines on ‘Shelter After Disaster’ (1982) and edited the Second Edition (2016) for the IFRC. He co-authored ‘At Risk, Peoples Vulnerability to Disasters’ (1994) and Second Edition (2004)  In 2015 he co-authored ‘Recovery from Disaster’.  In 1996 he was the first UK citizen to receive the UN Sasakawa Award for his ‘International Contribution to Disaster Prevention’  In 2004-5 he was part of the working Group convened by the British Government’s Chief Scientific Officer  to advise Prime Minister Tony Blair as he hosted the 2007 G7 Summit Meeting. From 2009-12 he was part of the international working group on the Independent Panel on Climate Change (IPPC) integrating Disaster Risk Reduction with Adaptation to Climate Change

He has been a Board Member of 4 NGO’s and in 1979 was a founder Trustee of Traidcraft, one of the UK’s first Fairtrade Organisations. He is the author, co-author or editor of 16 books and over 90 articles on disaster/ development related fields

In 2020 he published ‘Experiencing Oxford’ which he illustrated with his watercolours. In February 2021 Ian is leading an online course for architectural students in American Universities on the theme of ‘Sensory Architecture’

In 2003 Ian’s first wife Judy died. He remarried in 2008 to Gill and they live in Wheatley, a village near Oxford and in Aveton Gifford in South Devon. Gill and Ian each have three children and they share thirteen grandchildren.